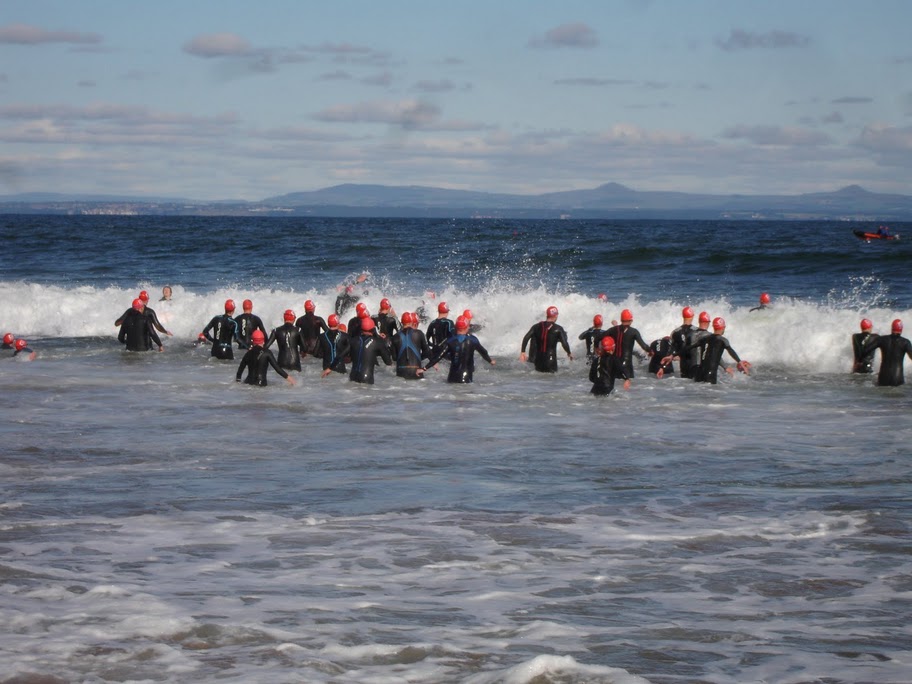 I have just been awarded a prize for triathlon – hmmmmm, well not exactly for a heroic sporting performance…….but for bravery !!! Ha ha!! Edinburgh Triathletes’ spectacular annular Honeystinger triathlon at Gullane Beach this weekend was almost reduced to a Duathlon by the serious breakers. The RIB couldn’t get past the tsunami-sized waves and the buoys would not stay put.

I had volunteered for kayak duty – with the proviso that I was competent in a flat calm canal. Having reported for duty with a horrified look on my face, I was told by Scott Bonkers Balfour to hang around the beach in my wetsuit and help drag distressed or exhausted triathletes out of the water. Phew!!!

Eventually the RIB got past the breakers. There were no start markers. And two spare girls in wetsuits not competing……..

If we had have been washed away at least we were holding red buoys with an army of Baywatch substitutes not far away.

What an awesome sight – huge breakers crashing behind and on top of us, and 200 strapping triathletes in wetsuits and red caps closing in on us from the beach, swimming over each other and US!!!

The day had started so well – someone gave me a pen and told me to write competitor numbers onto arm and leg muscles…….. 🙂

If anyone, grateful heroic competitor for instance, is moved to donate a spare tenner to www.justgiving.com/Anna-Henly0 I would be very happy!! I am attempting the London Triathlon on 31 July in aid of Breakthrough Breast Cancer. There is no way it can be as scary as what I have seen this weekend………..Wish me luck!!