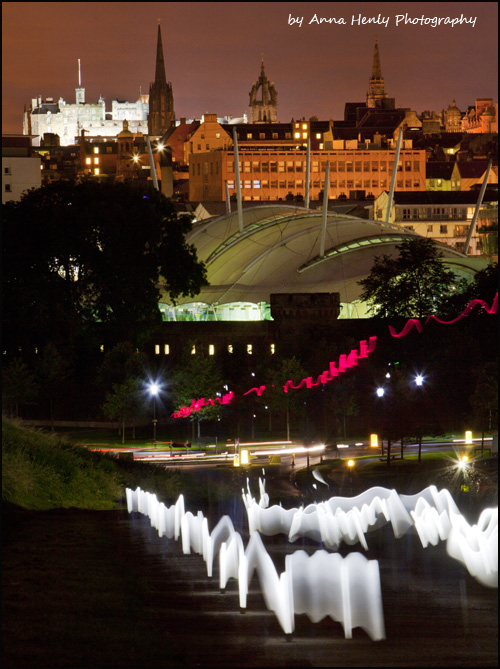 NVA’s Speed of Light runners have been a joy to work with. Hundreds of hill runners have been trotting around Arthur’s Seat in Edinburgh almost every night for the last three weeks in the London 2012 Festival Calendar. More details of NVA can be found at http://www.nva.org.uk

Many of you have asked whether it is possible to purchase images. It is possible, of course. I can offer prints, canvasses or acrylics. Please ask if you have other sizes in mind as the options are infinite. Prices include VAT. 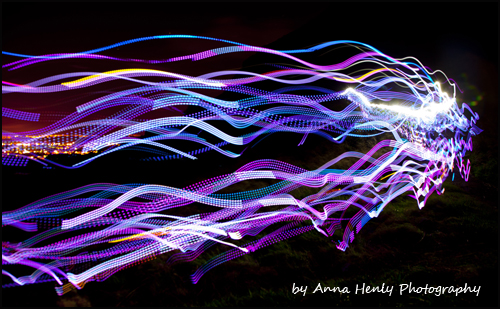 I took part as a runner on the opening night, but soon realised that I enjoyed putting my cameras to use, rather than my under-used trail shoes……. 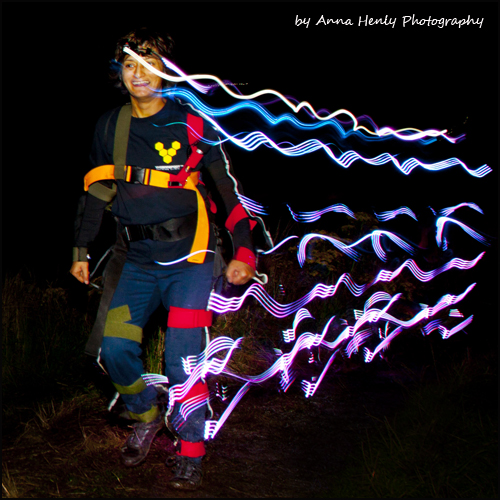 This happy hill runner is trailing a stream of light behind her, emitted from the many LEDS on the lightsuit. 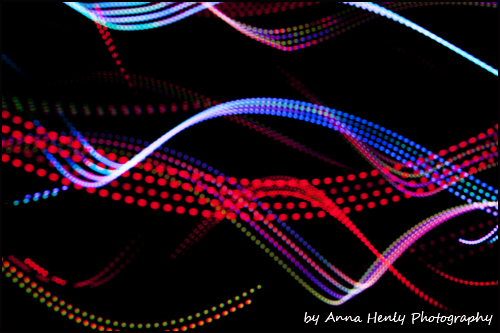 Experimentation with depth of focus and length of exposure has produced an astonishing collection of waves and dots in beautiful colours. 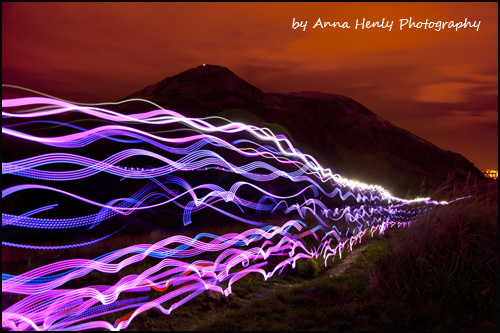 Each runner records a trail of wiggles in front of Edinburgh’s extinct volcano. 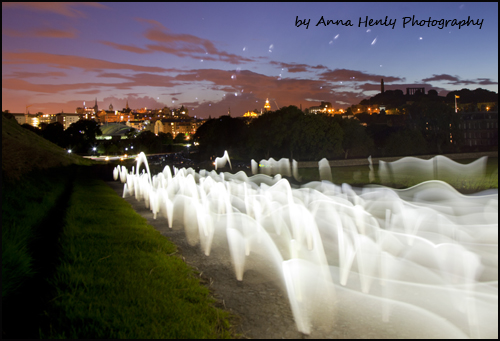 The glow is created by hundreds of hillwalkers carrying a staff which is illuminated at its base to light their way. 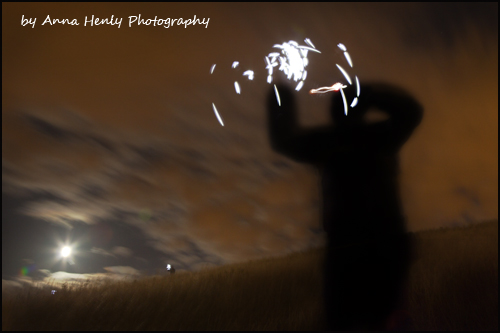 This is the part of NVA’s choreography known as “constellation”. Each runner is “switched off” and shakes a “joggler”. Hundreds of runners transform into twinkling stars on the black hillside. 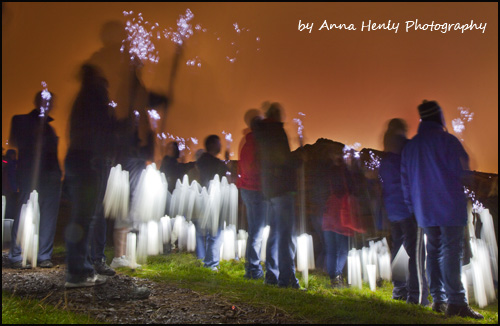 Walkers admire the show and communicate with the runners by waggling their light sabres, creating indelible traces on a photograph. 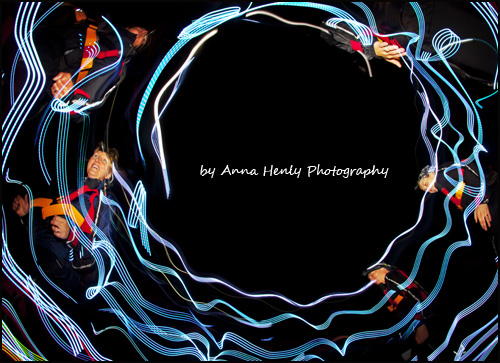 I captured this image with a fisheye lens, by asking the runners to carry on as normal – only with me as piggy in the middle. 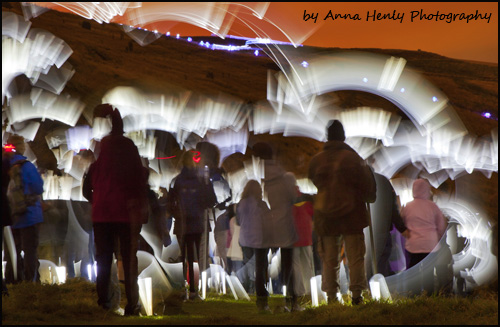 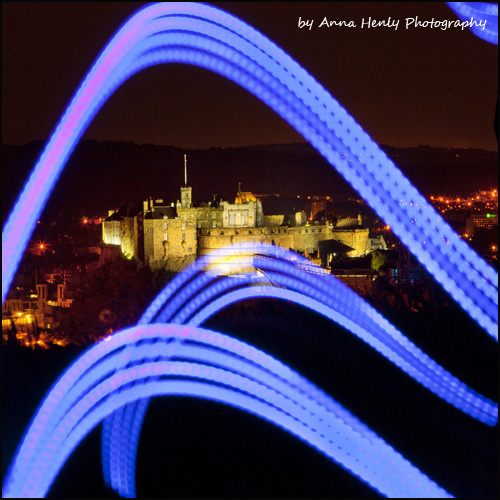 I love this picture of Edinburgh Castle. I took a lot of exposures to ensure that the castle was not obscured by light trails. 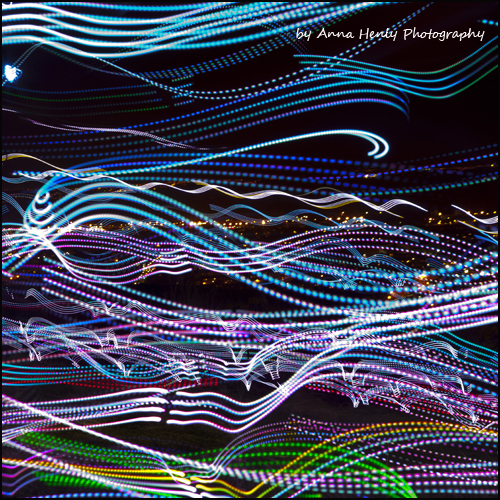 Each image was a surprise as the intensity and number of runners for each exposure was very experimental as I could not anticipate NVA’s choreography. 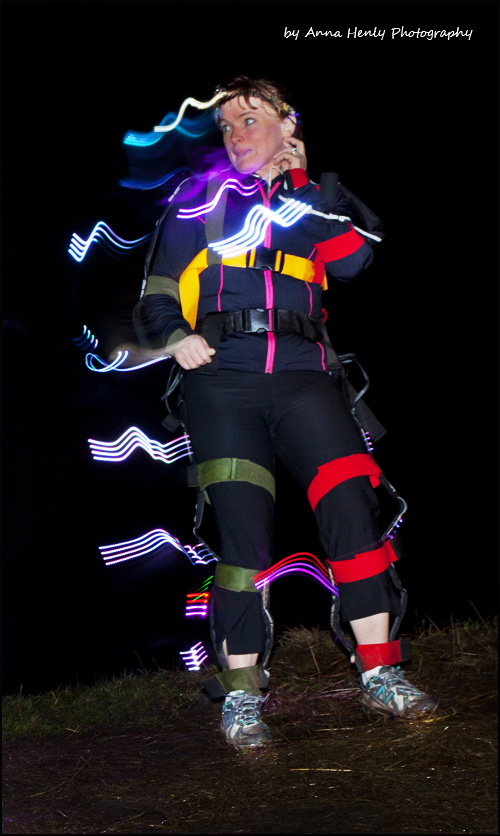 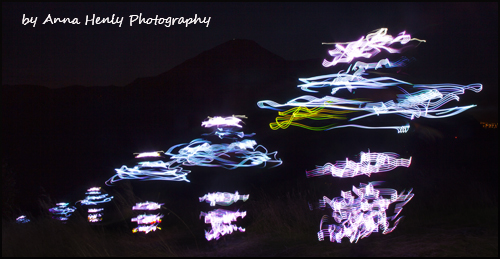 This was the manoeuvre known as “light house”. The runners had to revolve on the spot, reversing direction if they got dizzy. 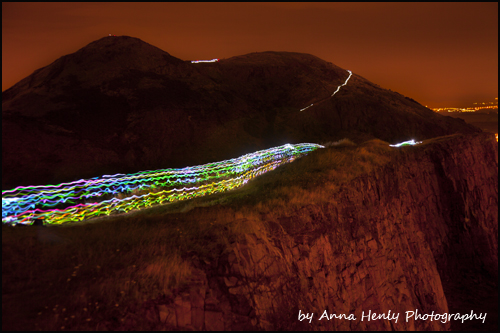 The runners ran along the footpaths on Salisbury Crags. I felt dizzy when I approached the edge to get a shot to include the cliffs. I am constantly amazed by how much detail is picked up by a digital camera when the only illumination is from starlight or from the city light bouncing off the clouds. 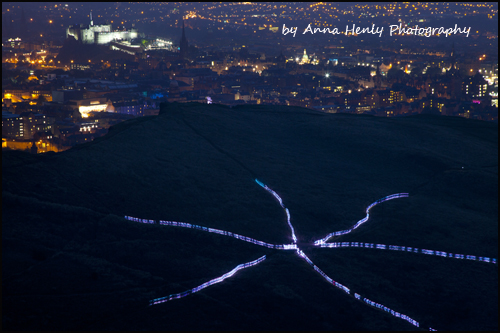 This is the spectacular view from Arthur’s Seat. The runners are spreading out from a central hub creating a star. Beautiful!! 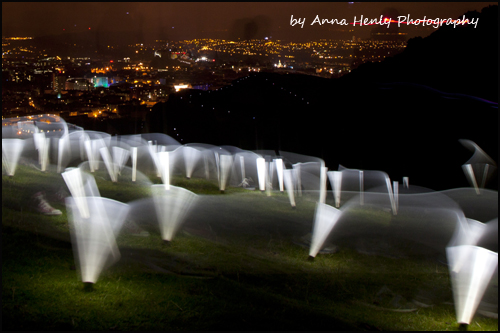 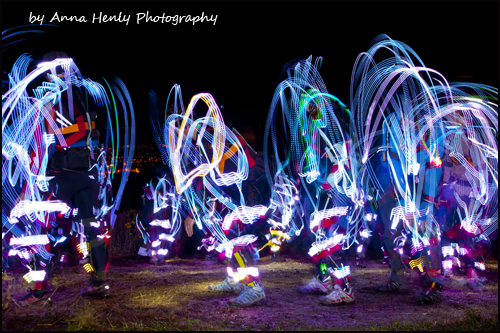 The runners are doing a “Mexican wave”. 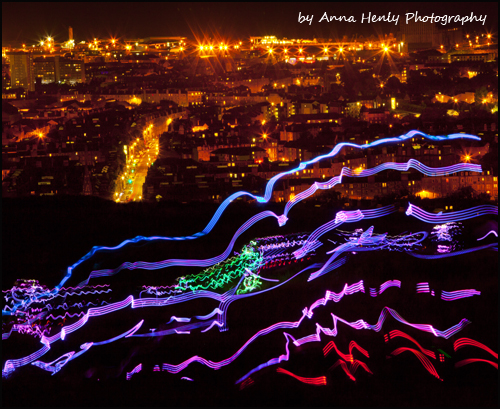 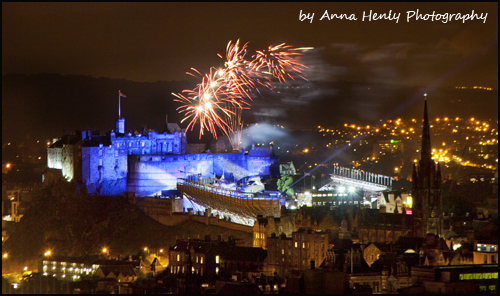 Edinburgh Castle and the Military Tattoo was also competing for my attention. “Auld Lang Syne” floated up on a calm night and was accompanied by a spectacular projection of the Saltire on the castle’s walls. Plus a few fireworks! 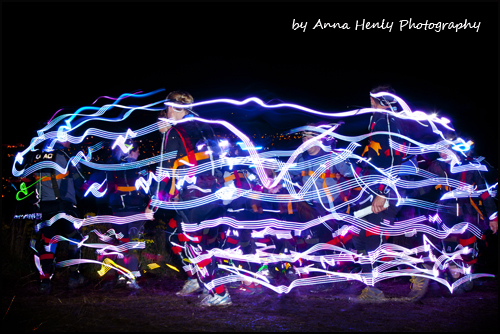 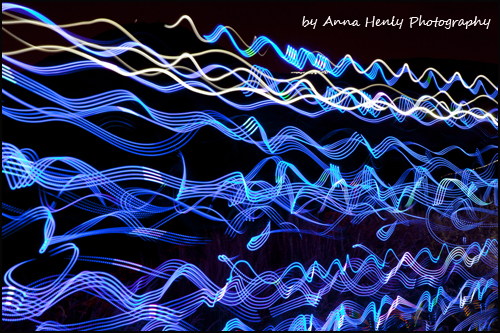 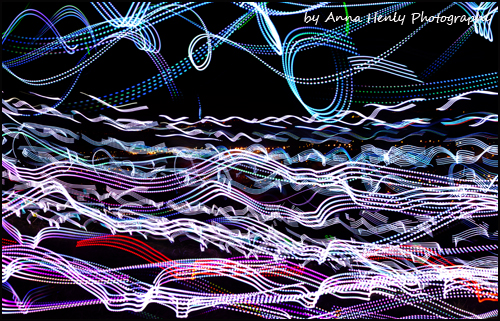 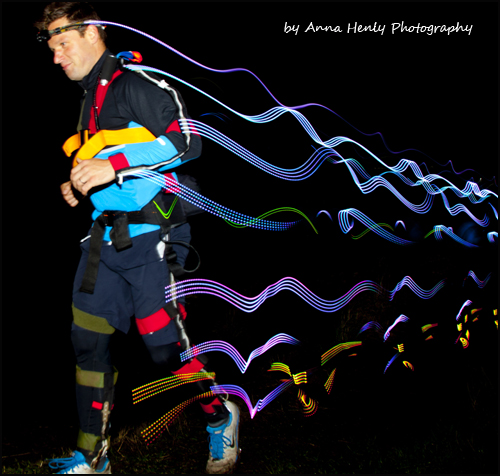 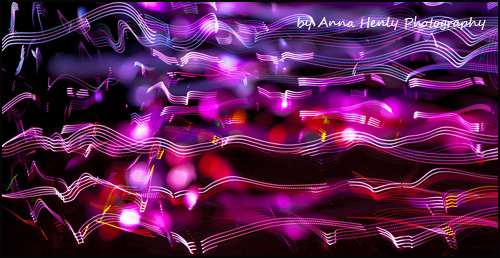 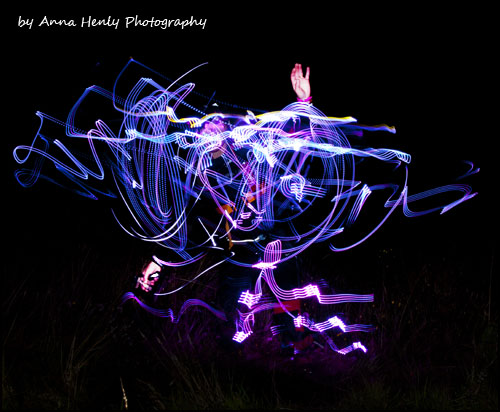 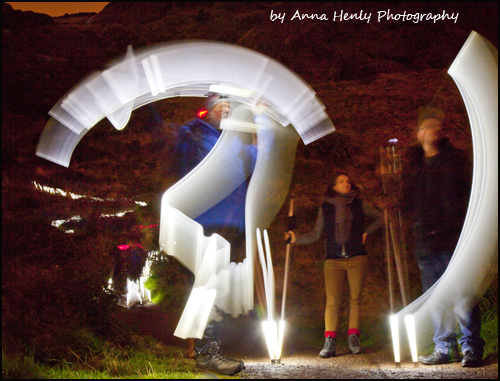 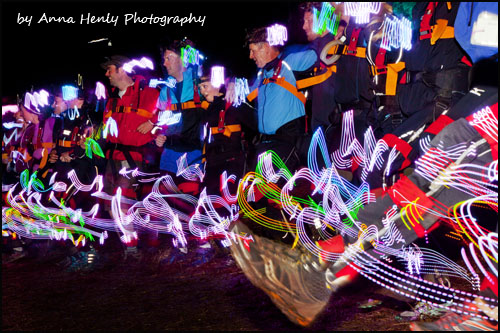 The evening usually ended in an impromptu cancan or Highland fling! 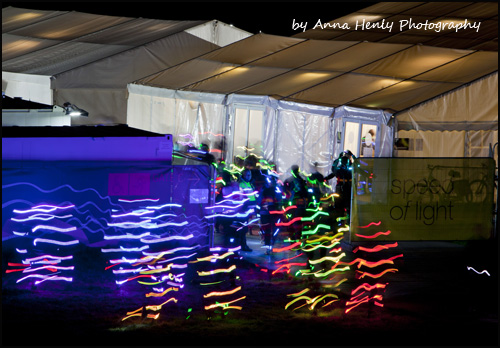 This is “bed time” for lightsuits. The runners return at 1:30am to basecamp. 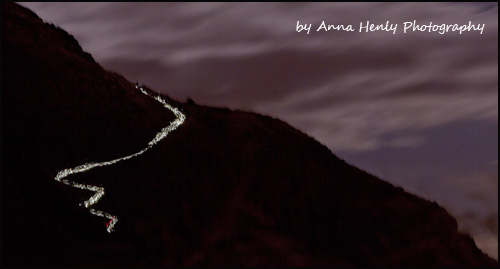 The walking audience provided a snake of light whilst scaling Arthur’s Seat to be enjoyed by the runners!

Wildlife Photographer of the Year 2012

Forth Replacement Crossing – arrival of the steel foundation caissons

The Knights of Royal England at Linlithgow Palace