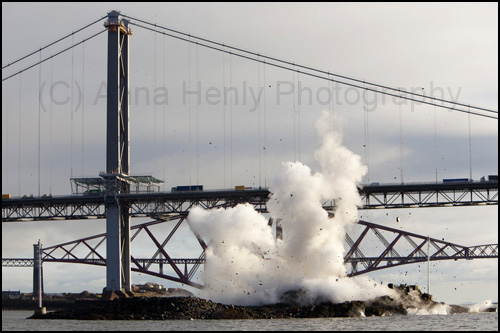 Phew!! This was a photo assignment that could have gone wrong very easily…….Beamer Rock had to be blasted to prepare for the Forth Replacement Crossing foundations. The blast was scheduled for the previous day and a handful of boats floated about for FIVE hours waiting for a couple of grey seals to move off the rock. They are curious animals and not surprisingly found all the activity very interesting……Acoustic monitoring is employed by FCBC  to ensure that if mammals are detected within 1km then any scheduled blasting is postponed. 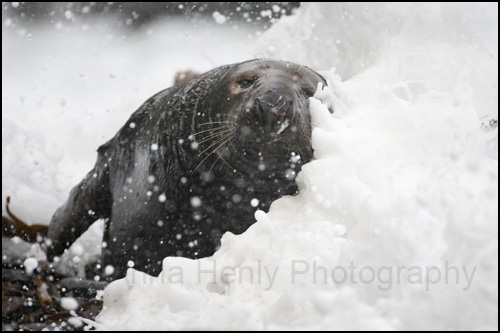 So we had no option but to return the following morning. And fortunately the seals had cleared off. We were told that there would be a 15 minute warning before the blast, followed by three toots on the horn immediately before blast-off. Manoeuvring the boat I was on wasn’t the easiest. The currents were making the boat drift off the position I needed to get the spray and flying rocks perfectly framed by the bridges.
I heard the 15-minute warning, but somehow managed to miss the three toots “wake-up”. I had my back to the action, was chattering to the boat captain and watching a puffin through the binoculars ………when I felt the shockwave and heard the rumble.  Fortunately it must take a second or so after blast-off  for rock and seawater to become airborne. The camera was ready (even if I wasn’t) so there was time to spin around and grab shots as the water reached its zenith. 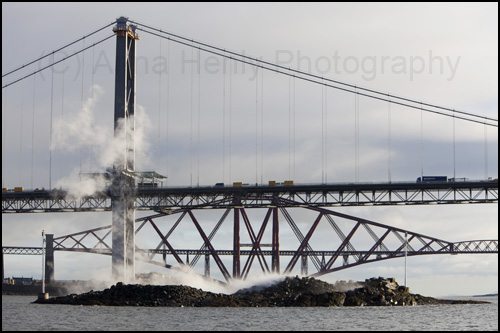 Once it was all over I began to shake – I could have waited for six hours and missed it!!